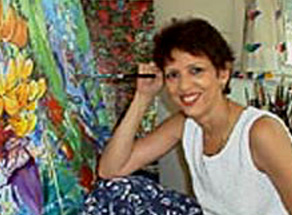 Attended "Institution Ste. Rose de Lima", an all girls Catholic Institution. After finishing her academic studies, she works for a summer with the Painter Nehemy Jean. In 1972 She receives a Scholarship to attends "La Universidad de Madrid" in Spain where she follows courses in Studies of "Filosofia y letras " and also attends a course at the "Bellas Artes de San Fernando". Later, she attends the Queens College in N Y, and The Taylor Business Institute, also in NY.

After her return in Haiti in the late 70's, She works and Paints in her spare time. In 1984 due to her health, she stops working and immerses herself in painting. She is mostly a self-taught artist with a passion for color, light, with the ultimate goal of  making herself and others feel peace and serenity and joy.  She and her family live in haiti for 10 years and later move to the United States where she still resides.

Her first Work is exhibited in 1973 along with "Les Femmes peintres Haitiennes" at the "Centre d'Art".

Her first Gallery exhibit was in 1985 at the  "Festival Art Galerie" in Haiti. Since then, her work has been exhibited in several private venues and Galleries Shows in Haiti, The Unites States, and France. Her works hangs in several Art collectors homes.

Group Exhibit sponsored by a group of galleries of the city of Palm Beach, Fl.

The Art Shop, Lake Worth, Florida

Mosaic Arts:  In 1998 and 2001, when she couldn't paint because of her vision problems, she found a new passion for the art of Mosaic

In 2003, She worked with other artists on a large mosaic project at the International Museum of Arts in McAllen , TX.

Produced several pieces for private collectors and presently works on pique-assiette mosaic, where she uses chards of broken ceramics on silver platters, furniture and other objects to create interesting pieces.

Loves Crafting and creates her own brand of paper -mache dolls and painted objects.